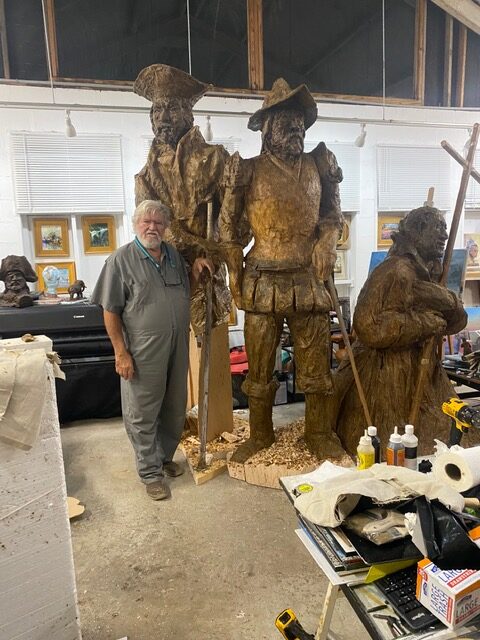 Local artists are joining with the Rockport Cultural Arts District (RCAD) to help raise money for a sculpture project by one of their most respected colleagues, Steve Russell.   Russell has designed a series of sculptures about Aransas County’s heritage, “Cultural Interface,” depicting the historic exchange between European civilization and Native American culture.  The Aransas County Navigation District is partnering with the Cultural District to sponsor this public artwork.

RCAD has taken the lead on fund-raising, collecting financial contributions from individuals, businesses and philanthropists.  Executive Director Jennifer Day notes, “We’ve been successful in funding the first part of this process, the design and creation of wax models for the first sculpture group of a Conquistador, Pirate and Monk.   However, the cost for having these sculptures bronzed will require us to raise additional funds of $125,000.   Luckily, a group of Steve’s colleagues have joined with us to help raise money, in addition to several making monetary donations.   They have been inspired and mentored by Steve for decades, and they are working hard to acknowledge all his efforts in helping establish the Rockport Art Association years ago and encouraging their lives as artists.  This is just another example of how the Rockport-Fulton artistic community has come together to help the area be recognized as a special place for artists and other creative entrepreneurs.”

An online auction will feature donated artwork, both originals and limited edition prints, from numerous artists who have figured prominently in Rockport’s history as an art colony.  Artists’ families, collectors, and gallery owners are joining in the efforts.   The contributions represent many aspects of the art colony that has existed since the 1940s.   A group of students of Simon Michael, the founder of the colony in 1948, has donated paintings.  Additionally, the families of Jack Cowan, Al Barnes and Herb Booth, the sporting, wildlife and nature artists who called themselves “The Rockport Gang,” have donated prints.  Internationally-known sculptor Kent Ullberg, a friend and colleague of Russell, has given a sculpture for the auction.  Famed Texas artist Buck Schiewetz’s grand-daughter has donated two original drawings and a print representing his coastal scenes.

Artists, area collectors and gallery owners have also donated work by Rockport Center for the Arts Poster Artists, including Chance Yarbrough, Angalee DeForest, Al Barnes, Teresa Justice, Hal McCaskill, Russell and others.  Originals by other local artists include Ed Boyd, Elsa Mathews, John Speck, Jamie Speck, John Martell, Popo Cosby, Lorrie Harrington, and Eric Von Seibert.  Maria Nesbit and Pam Fulcher donated original art, as well as many hours to professionally photograph donations for the art auction site.  Two major paintings by Larry Felder have been donated, one by the artist from the Felder Gallery in San Antonio and a large 5’ x 7’ piece by one of Felder’s patrons and collectors.  Several rare historic prints are being offered, including Jackson Ehrlich’s print of the Fulton Mansion and Ed Fickett’s of the Estelle Stair Gallery/Sorenson Building.   Work from early founders of the Rockport Art Association includes Shirley Farley, Jane Turner and Rip Harrison.

The auction will go live Saturday, December 12th, on the RCAD website at www.rockportculturalartsdistrict.com and run until Tuesday, December 22nd.   The auction is being promoted statewide with collectors’ groups for Texas art as a way to publicize the Texas Gulf Coast Aesthetic and Rockport School of Landscape Painting.

More information about the Russell sculpture project is available at https://rockportculturalartsdistrict.com/cultural-interface-major-public-art-initiative/.   For updates on the auction, follow https://www.facebook.com/RockportCAD/.