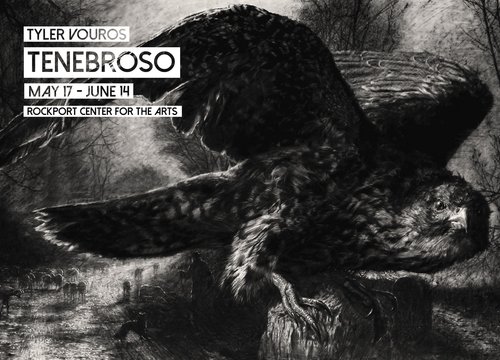 The Rockport Center for the Arts presents:

Tenebroso or tenebrism is the Italian word for moody and dark, which is befitting for this exhibition comprised of large-scale charcoal works. Vouros describes his work as, “A vivid luminosity emerges from the void of the shadows, as one last breath before being returned to the earth.”

Vouros’ work celebrates natural history and the scientific community in the afterlife of flora and fauna by using still life and specimens from various collections. His most recent pieces incorporate old master landscapes from the likes of Rubens, Corot, Grimshaw, and others, as a nod to the masters of the past and Vouros’ formal training in the fine arts.

“The size and realism of Vouros’ work contribute to its magnificence,” says Curator, Elena Rodriguez. “The microscopic, rendered on a macroscopic scale, envelopes the viewer in his macabre and majestic universe.”

“A significant metamorphosis occurs when becoming encompassed with this work at an immersive scale; the transformation sometimes departing entirely from its original anatomy,” states Vouros to describe the experience of viewing his work:

Vouros’ work has been in numerous exhibitions including The Leigh Yawkey Woodson Art Museum, Sotheby’s, Collier West Gallery, Flowers Gallery, Neue Leipziger Messe, Richard J. Demato Gallery, SEEN Gallery, Pier Sixty Chelsea, and Art Southampton; to name a few. Appearances in publications include 2016, 2017 & 2019 Manifest International Drawing Annual, Artscope Magazine, Fine Art Connoisseur and American Art Collector. Other accomplishments include a residency grant in Leipzig, Germany from the Villore Foundation and a sponsorship grant from MASS MoCA. Vouros has also completed several special projects and commissions, including a collaboration with Grupo Cortefiel and artwork for CHANEL. His work is held in public and private collections throughout the United States and the European Continent.

Vouros resides with his wife and two young children in the Pioneer Valley. He maintains his studio practice in an old factory building on a canal in Holyoke, Massachusetts. He is an award-winning educator working in drawing, painting, and foundations of art. He is currently teaching as an Assistant Professor of Art at the Community College of Rhode Island.

Tenebroso opens to the public on Friday, May 17. An opening reception with the artist will take place on Saturday, May 18, from 5 to 7 PM. A gallery talk with Vouros will precede the reception at 4:30 PM. Tenebroso will be on display through June 14, 2019.

About the Artist in Residence Program
Vouros is Rockport Center for the Arts’ seventh Artist-in-Residence. In conjunction with his solo show, he will set-up a working studio at the Art Center for one month. Art patrons will be able to visit him, observe his studio practice, and learn about his medium and technique. During his residency, he will also lead and engage the community and students at Rockport-Fulton High School in a series of workshops.

The Artist-in-Residence program is made possible through an anonymous contribution. The program exists to invite artists for time and space away from their typical environment, practice, and obligations. It provides artists from other parts of the world, a venue for presentation, production, reflection, and research. The program is a cultural and humanities benefit to the communities of Rockport and Fulton. Prior artists that have participated in residencies are Rabecca Signoriello (2018-Pennsylvania), Ellen Heck (2016-North Carolina), Bob Lockhart (2015-Kentucky), Diane Pike (2014-North Carolina), the team of Judith Selby and Richard Lang (2013-California) and Ewoud de Groot (2012-Holland). 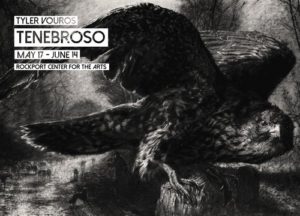