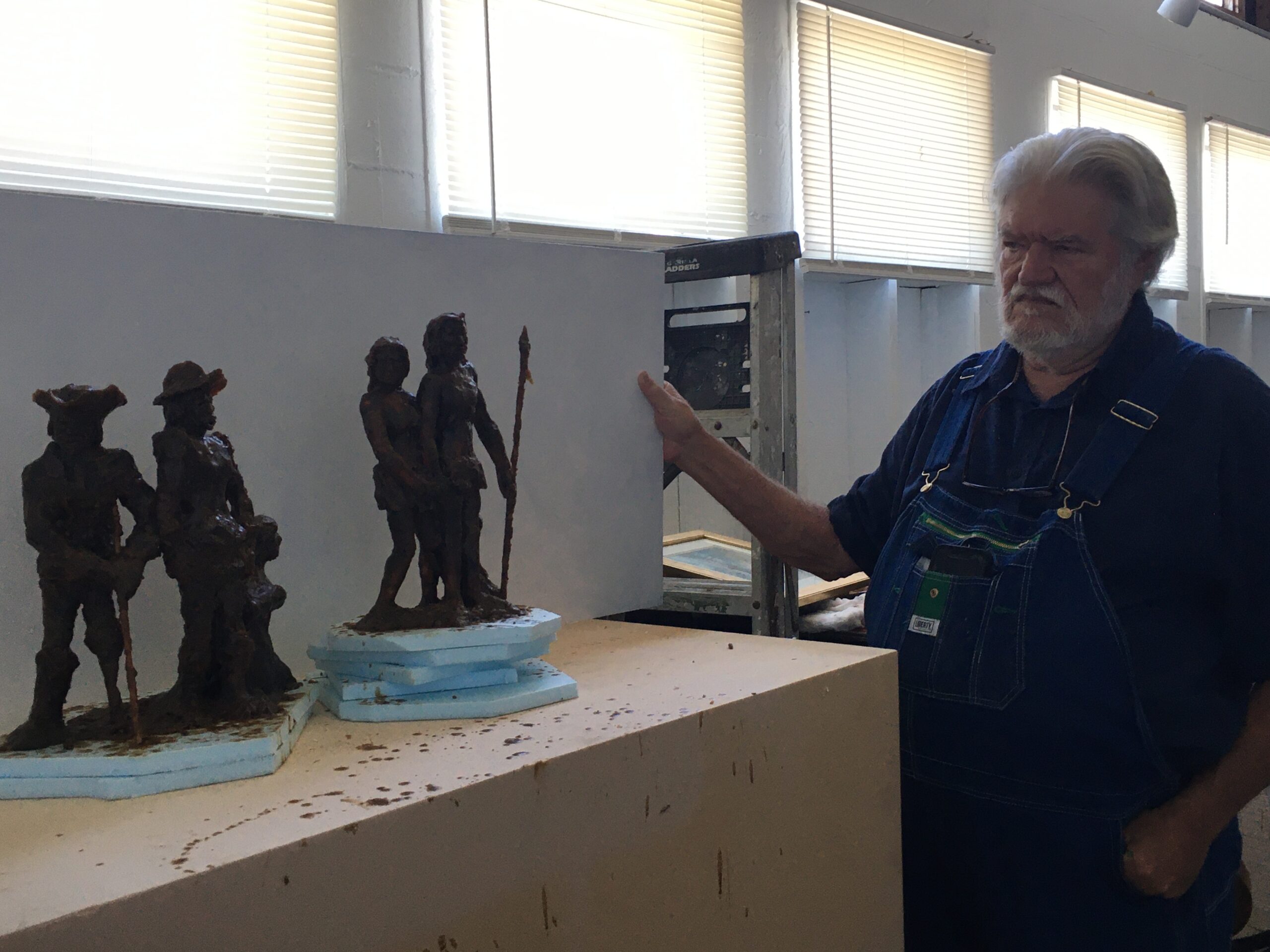 The Rockport Cultural Arts District (RCAD) is continuing to collaborate with artist Steve Russell on his “Cultural Interface” sculpture project, documenting the multi-cultural heritage of Aransas County, including the contributions of early Native American, Hispanic and other nationalities and ethnicities.  RCAD is sponsoring Russell’s sculptures with fund-raising and management roles, collaborating with the Aransas County Navigation District.  The first of the two groupings in Russell’s series is currently in the molding and bronzing process at Hefestus Fine Arts, while Russell continues to conceptualize the final design for the second grouping. 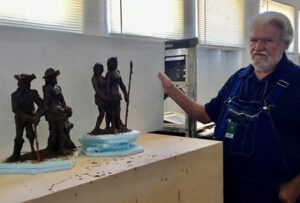 In an ongoing dialogue to listen to input from representative members of different indigenous groups and community organizations, Russell and Jennifer Day, Rockport Cultural Art District’s (RCAD) Executive Director, have met with Larry “Running Turtle” Salazar, a Corpus Christi leader and advocate for regional Native peoples.  They discussed how Salazar and others might be included in programs in Rockport to raise awareness about Indigenous cultures.   Day noted, “The Rockport Cultural Arts District, like the other 51 districts throughout Texas, celebrates the different ethnicities and cultures that have influenced our communities.  We’ve recognized Black, Hispanic and Vietnamese groups in our programs and activities, and Steve’s sculptures are a tribute to Indigenous peoples’ roles in our culture.  As Joseph Fox of the Fulton Mansion noted in a letter to the editor of The Rockport Pilot, we see these sculptures as a ‘place to start conversations about local history,’ including Hispanic and Native American history, that remains relevant but largely unknown.”, see complete letter shown below.  Also, noted below is the letter to the editor of The Rockport Pilot, from Jennifer Shaw.

Russell’s artist statement about this work is available at https://www.steverussellart.com/blog.   More information about the sculpture project can also be found at https://rockportculturalartsdistrict.com/steve-russells-cultural-interface-sculpture-project-update/.

Dear editor:  The recent article in Texas Monthly about the Steve Russell statues in Little Bay is yet another misguided attempt to generate controversy by trashing small town Texas.  It unfairly maligns Russell’s work by associating it with Confederate statues and trashes Rockport as racist because there are white Trump supporters living there.   Furthermore, the article misinterprets the history of the Spanish in the Coastal Bend as “imaginary” because the event Russell depicts is not historical.  The Spanish presence in modern-day Aransas County, where they had a fort, mission, and the port of El Copano, was real.  So are terms in our region brought by the Spanish like Corpus Christi, Victoria, Refugio, or even Aransas (a combo of Our Lady of Aranzazu and a Karankawa group called the Aranama).  The article reduces it all to “conflict, disease, and slavery” but ignores that while periods of open war existed between the Spanish ad Karankawa, the establishment of Nuestra Senora del Refugio Mission in present day Refugio in 1795 ended the hostilities with the Karankawa dominating the Spanish while incorporating parts of Spanish culture into their ways of life.   The article conflates the actions of later colonizers who exterminated the Karankawa with the Spanish depicted in Russell’s statues and miss an obvious point, why can’t “Cultural Interface” be a place to start conversations about local history?  With a greater number of Catholic, Spanish-speakers moving to Texas, this history remains relevant, but largely unknown.   Controversy generates clicks and feeds trolls, but this is merely another missed opportunity of 2021.    Joseph Fox

Letter to the editor of The Rockport Pilot, from Jennifer Shaw….

We live in Rockport, TX, which is an “artists colony”.   We all rely upon the First Amendment to the U.S. Constitution and Article 1, Section 8 of the Texas Constitution, which preserves everyone’s right of free expression, including the right of artists to paint, sculpt, and otherwise create whatever they want.   In Texas an artist is free to sculpt Karl Marx, Booker T. Washington, Herman Goring, Geronimo or Pope John Paul II, and publicly display the statue as long as the owner of the land where it sits give his/her permission for the placement of the status on his/her land.

The ancestors of all of us in Rockport came from somewhere else.   In 1755 the British army deported my ancestor Jean Paul Lafey from Acadia, sending him to Philadelphia, not Louisiana.

That same year four French soldiers and six Shawnee men showed up at the farm of another ancestor, Thomas Jemison, in the woods of middle Pennsylvania, and kidnapped his two daughters, Betsey who had red hair and Mary who had blond hair, as well his wife and his sons.   After more than a day’s march through the forest, the French and Indians stopped and the Shawnee ritually murdered Betsey, her two brothers and her mother, and ultimately scalped them wile Mary was forced to watch.  Mary was spared that fate because she looked like the “Corn Maiden”, a figure in Algonquian and Iroquoian cosmology.

Mary was then sold to two Seneca women, who ultimately arranged for her to be married to my ancestor Hiakatoo, an ill-tempered Seneca warrior who killed many Englishmen at the Devil’s Hole Massacre, in the gorge of the Niagara River on Sept. 14, 1763.  Around that time Mary and Hiakatoo lived in Little Beardstown, on the Genessee River south of Rochester, NY.

George Washington was a British colonial soldier, in that era.   He never set foot in Little Beardstown.  However, in that era the British at Fort Detroit were defending themselves from 10,000 Seneca and Mingo (Southern Seneca) warriors who, among other tribes, were besieging the British army as part of Pontiac’s Rebellion (1763-1765), an armed conflict between the British and Algonquian, Iroquoian/Seneca, Muskogean, and Siouan-speaking Native Americans.

Pontiac’s Rebellion represented unprecedented pan-Native American resistance to European colonization in North America, challenging the British government’s attempts to impose its will and abrogate Native sovereignty.   Although that rebellion originated int eh Grate Lakes and the Ohio Valley, the violence spread as far west as Illinois and as far east as western Virginia.

The intense war was fought to a standstill over two years.  Consequently, the British Empire was forced to reconsider its policy toward Native Americans, ultimately recognizing tribal autonomy from British rule.

While some colonists, like Ben Franklin, admired some of the tribes’ form of representative government, such as that established under the Iroquois Great Law of Peace, generally American colonists resented the British change of heart, given that such conciliatory measures ran counter to the colonists anxieties and their hostility to Native Americans.   Those Colonists’ attitudes contributed to the growing disillusionment with the British, which culminated in the Revolutionary War.

During the Revolution my ancestor William Washburn, just 14 at its beginning, joined the Massachusetts Militia and spent the war as a sniper, sitting in trees, shooting at British soldiers.   Only a small portion of the colonists fought the British army.

On May 31, 1779, General George Washington wrote and issued a detailed order to his subordinate, General Daniel Sullivan, to go north to the Iroquois lands, and exterminate as many of the Iroquois people as possible.  See https://founders.archieves.ogov/documents/Washing/03-20-02-0661.

General Sullivan and his troops marched north, following Washington’s orders, exterminating as many Iroquois people as they could.   My ancestor Mary Jemison and her five children had to flee from their home at Little Beardstown as the American colonial army attacked that village.   Many Iroquois fled to Ft. Niagara and starved outside the fort in the icy winter.

Mary and the kids made their way south to what is now Letchworth State Park in New York and hid from the Americans in a cave.   My kids and I had the sobering experience of sitting in that cave in 2002.

The Americans came to Letchworth, and following General Washington’s orders, began exterminating Seneca there.  By the grace of some deity, Mary and the kids safely made their way to the Rift Swamp, on the shore of Lake Erie, and hid there until the end of the Revolutionary War in 1783.   After the war, my ancestor Mary Jemison and her kids moved further south, to what is now the Cattaraugus Reservation on Lake Erie.

By 1819 the American and New York State governments had “acquired” ownership and control of virtually all Seneca land in New York State.  They sold much of it to the Holland Land Company.  My ancestor William Washburn’s son bought a tract of that land in Busti, NY, right near the Cattaraugus Reservation.

Father and son rode on horseback from Boston to Lake Erie to see their land and build a cabin.  When that work was done, they rode back to Boston.  The entire family, men and women, about 10 of them, rode on horseback back to Busti/Cattaraugus in 1820, and lived there for many generations afterwards.  There were not a lot of white people living in that area in the early 1800s, so a number of women-with-no-last-names married into my family.

Sometime after 1865, my father’s great grandfather, another Washburn, married a woman name Mary Jemison.  She was the granddaughter of that blond girl who was not scalped because she looked like the Corn Maiden.

Because of who her grandmother was, that Mary owned a very nick lakeside lot on a beach where the mouth of Cattaraugus Creek flows into Lake Erie.  By the time 1916 rolled around, my father and his brothers and sister would spend their summers living at Seneca Beach, while living as urban Americans during the school year.

That later Mary Jemison’s daughter Lucy Washburn was 18 years older than my dad.   She lived with my Washburn relatives in the city, taking care of the kids.  At some point Lucy Washburn met a man who was a drummer for the Buffalo Philharmonic Orchestra and married him.  He was Seneca, too.  Every year, when my class from my very white elementary schools was bused to an afternoon philharmonic’s performance, Lucy Washburn would be there, waiting for me.  I would get a big hug and lots of love, because Lucy didn’t have any children.  She was a real “Jemison” and I was a “Blue Eyed Jemison” but it didn’t matter even in the 1960s.  The warmth of Lucy’s love for me is still with me 60 years later.

In 1978, all the Seneca relatives came to my parents’ backyard for our wedding and reception, which was “interesting” with my melded family, the waspy Washburns, the Seneca Washburns, and the Jimersons, the South Buffalo Irishmen who lived near the steel plant, the Lafeys whose ancestors had been kicked out of Acadia but “missed the boat” on becoming Cajuns, and my husband’s people, very stiff upper lip British-Canadians and a huge crew of Ukrainians who had to change their names, for their own safety and advancement when they move to anti-Slavic, anti-Semitic Canada around 1914.  Eighty-eight-year-old Lucy and her husband, the Seneca philharmonic drummer, were there.  He sat in with the band, playing Seneca beats while younger cousins taught the Boston Yankees, Irish, Brits, Canadians, and Ukrainians to dance the Seneca way.  That party was what Americans should be about, laughing, learning and appreciating each other for who we are.

Coming from that family, European and Native American, I have very little patience for narcissistic self-promoters who take offense at EVERYTHING, in the name of recognizing (and even profiting from) their ancestors “suffering”.   They stick their noses into public life, as well as artists’ creative process, demanding that the world not offend them and recognize the “suffering” of their ancestors.

My Seneca and colonist ancestors were ducking it out at the same time the Karankawa, the Comanche, and Spanish and English speaking Texas settlers were doing the same down here in the Coastal Bend.  That was 200-250 years ago.  Let it rest.

The whiners, opportunists, self-promoters, and drama queens in the Coastal Bend and Austin, and the reporters, who make mountain our of molehills, need to grow up.