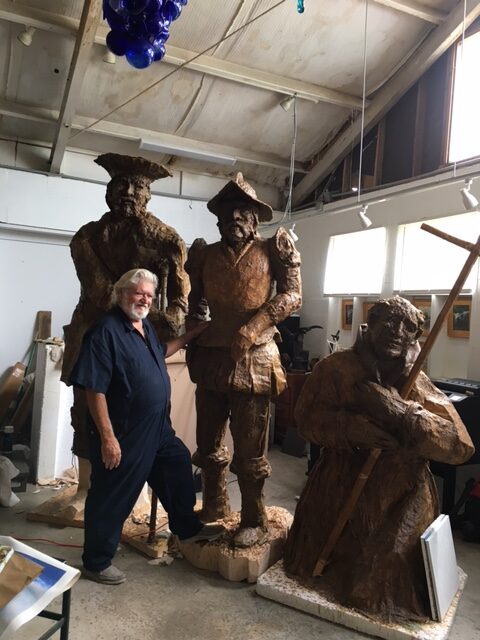 The Rockport Cultural Arts District (RCAD) would like to clarify information currently in the press and social media concerning its sponsorship of “Cultural Interface,” a series of bronze sculptures by renowned Texas artist Steve Russell.  Numerous statements that have been made or posted are inaccurate.

RCAD, like the other 48 Cultural Districts in Texas, seeks to represent and promote the diversity of the State through programs, initiatives and projects.  Numerous Texas Cultural Districts document and celebrate the contributions of specific neighborhoods or areas in Dallas, Houston, El Paso, San Antonio and others with significant minority populations.  In the years since it was designated by the Texas Commission on the Arts in 2016, RCAD has sponsored initiatives about the Vietnamese, Black and Hispanic populations that have been a part of the area’s history and culture.  And, it has others in its Strategic Plan for the future.  Its Board and Advisory Group contain members of both Vietnamese and Hispanic backgrounds, who advise and inform on cultural appropriateness.  Its Executive Director, Jennifer Day, is of Comanche descent.  RCAD has always sought to include diverse voices of a representative group of under-represented populations.

RCAD’s sponsorship of Russell’s “Cultural Interface” public art sculpture has been a continuation of this inclusiveness, representing the legacy of the early Indigenous population, as well as those Europeans who also inhabited Aransas County.  RCAD did not commission the work, as has been reported; it is however supporting its creation through fund-raising and other management activities.

Russell, the artist who is creating “Cultural Interface,” is a lifelong resident of the area and has been friends and colleagues over seven decades with many local Hispanics, Vietnamese and Native Americans, with whom he has consulted about these sculptures, including how local individuals might be included as the art emerges and is installed.  These individuals are not part of any vocal activist groups and, for now, prefer to remain anonymous until Russell’s plans for the depiction of the Karankawas are finalized.  Russell has been a strong advocate for the disenfranchised over his years, helping many Vietnam War and other Veterans negotiate the complex Veterans Administration healthcare system.  He is known as a champion of the underdog and under-represented in the area, standing up on a personal basis against racism and injustice.  His paintings of Native American peoples and scenes have been positively recognized over the years.  The Texas Maritime Museum in Rockport has recently consulted with him on backdrops for an exhibit on Native peoples.

The sculpture design as envisioned by Russell has two components:  A series of Europeans representing those who came to the Live Oak Peninsula over its early years, and another grouping of Native Americans.  The European designs have been finalized and are currently at a Foundry in the molding and bronzing process.  Russell has not yet designed the Native American series.  He has commented, however, that they will not follow any stereotypical depictions of Karankawa as either cowering and submissive victims of European colonialism or as warring, cannibalistic and violent Indians.  Russell’s “Artist Statement” about the project can be found on his website at https://www.steverussellart.com/blog.

In the year and a half in which this project has been in existence, there has been widespread local and regional support with no mention of controversy.  Many members of the community at all socioeconomic levels and from many backgrounds have donated to the project financially and through in-kind services.   There has also been extremely positive local and regional publicity with no mention of any widespread controversy until recently reported by one outlet.  We are hopeful that the press will be responsible in the future in not misrepresenting, sensationalizing or distorting the sentiments of Native American descendants, reaching out to all segments rather than just to vocal activists.

Many complex art works have been misrepresented when they first appeared, with members of the public not understanding the intent or the complexity of the message.   Hopefully, as this work is completed and installed, some who have had initial mis-giving’s, will see its power.  Freedom of artistic expression, like Freedom of Speech, is a basic human right, and we are hopeful that those who criticize Russell and his work will look more deeply at his vision.  Both RCAD and Russell welcome further discussion with others.  To schedule a meeting, contact Jennifer Day at jdayrose@gmail.com.

A tribute to Russell is being planned for July 23 to further recognize the impact he has had on the Rockport-Fulton art scene, and also to continue with fundraising efforts via a live auction.  Numerous long-time friends and admirers are also participating in a good-hearted “roast” during the evening event.

RCAD Executive Director Jennifer Day said a group of Russell’s colleagues have joined in the effort to help raise money.

“They have been inspired and mentored by Russell for decades, and are working hard to acknowledge all his efforts in helping establish the Rockport Art Association years ago, encouraging their lives as artists,” said Day. “This is just another example of how the Rockport-Fulton artistic community has come together to help the area be recognized as a special place for artists and other creative entrepreneurs.”

Many artists, who have figured prominently in Rockport’s history as an art colony, have donated artwork, including originals and limited edition prints. Artists’ families, collectors, and gallery owners are joining in the effort, as well.

The contributions represent aspects of the art colony that have existed since the 1940s.  A group of students of Simon Michael, the founder of the colony in 1948, has donated paintings. The families of Jack Cowan, Al Barnes, and Herb Booth, the sporting, wildlife and nature artists, who called themselves The Rockport Gang, have donated prints, as well.

Internationally-known sculptor, Kent Ullberg, a friend and colleague of Russell, has given a sculpture for the auction. Joan Phenix, widow of famed artist Harold Phenix, has provided a significant watercolor to the effort.  The granddaughter of famed Texas artist Buck Schiwetz has donated two original drawings and a print representing his coastal scenes.

Two major paintings by Larry Felder have been donated, one by the artist from the Felder Gallery in San Antonio, and a large 5’x7’ piece by one of the Felder’s patrons and collectors.

Several rare historic prints are being offered, including Jackson Ehrlich’s print of the Fulton Mansion, and Ed Fickett’s print of the Estelle Stair Gallery/Sorenson Building.

Work from Shirley Farley, Jane Turner, and Rip Harrison, early founders of the Rockport Art Association, are included, as well.

More information about the Russell sculpture project is available at https://rockportculturalartsdistrictcmo/cultural-interface-major-public-art-initiative/.

For updates about the planned “Tribute to Steve Russell”, follow https://www.facebook.com/RockportCAD/ 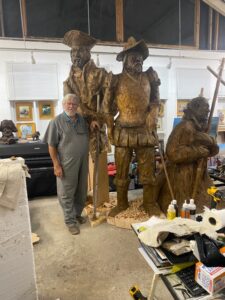 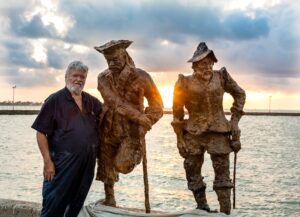