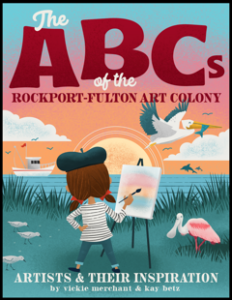 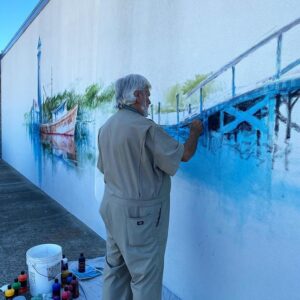 RCAD received an Arts Respond grant from the Texas Commission on the Arts to assist in the commissioning and production of the mural.

The mural unveiling was followed by the premiere book signing of “The ABCs of the Rockport-Fulton Art Colony:  Artists & Their Inspiration”, and was co-sponsored by the History Center for Aransas County.  The book signsing event was held in front of the mural.   Russell, who was instrumental in the establishment of the Rockport Art Association and the Rockport Art Festival in the sixties, has been working on the painting for several months.  He has depicted several scenes frequently painted by colony artists, including the Aransas Pass Lighthouse, boats and fish houses in the harbors, and the Bridge to Frandolig Island.  The work captures the importance of the wildlife, ecosystem and historic structures in the area to the development of the Rockport-Fulton School of Landscape Painting and the Texas Gulf Coast Aesthetic.   The mural was funded by a grant from the Texas Commission on the Arts.  It joins three other murals in the Downtown District, one of 48 Texas Cultural Districts that celebrate individual communities’ unique sense of place.

The ABC book was written by Vickie Merchant, former President of the History Center, and Kay Betz, former Secretary.  It chronicles the history of the art colony for younger readers, including the work by many artists in supporting environmental groups like the Coastal Conservation Association, Ducks Unlimited and others.  Educational activities in the book encourage readers to learn more about art, history, science and technology.  The authors worked with local teachers and artists on the book.

The book was funded by the H-E-B Tournament of Champions.  All proceeds from the sale of the book benefit the History Center, where a 2016 exhibit began research into the subject.  The book is a companion to “The Story of the Rockport-Fulton Art Colony:  How a Coastal Texas Town Became an Art Enclave,” to be published by Texas A&M University Press in November, 2021.

One hundred limited-edition, hardback versions of the book are available for $45 with soft-back copies available for $35.   Copies of the book can be bought at the History Center or ordered online at https://www.thehistorycenterforaransascounty.org/store.

The Rockport Cultural Arts District is extremely honored to have sponsored the premiere of “The ABCs of the Rockport-Fulton Art Colony” children’s book.   What a delightful representation of Rockport-Fulton’s artistic offerings in visuals and print, in an easy to read children’s book.   Adults will love it too!   Authors Kay Betz and Vickie Moon Merchant are a brilliant team.